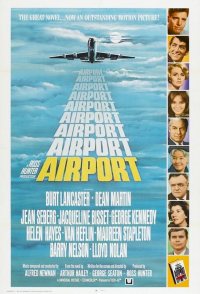 Plot of the first movie: This precursor to later "epic" 70's disaster films illustrates 12 hours in the lives of the personnel and passengers at the "Lincoln Airport." Endless problems, professional and personal, are thrown at the various personnel responsible for the safe and proper administration of air traffic, airline management and aviation at a major US airport. Take one severe snowstorm, add multiple schedules gone awry, one elderly Trans Global Airlines stowaway, shortages, an aging, meretricious pilot, unreasonable, peevish spouses, manpower issues, fuel problems, frozen runways and equipment malfunctions and you get just a sample of the obstacles faced by weary, disgruntled personnel and passengers at the Lincoln Airport. Toss in one long-suffering pilot's wife, several stubborn men, office politics and romance and one passenger with a bomb and you have the film "Airport" from 1970.