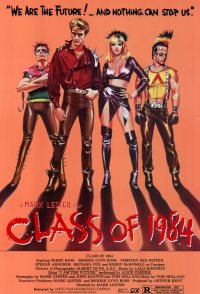 Plot of the first movie: There's something strange going on at the graffiti-covered Lincoln High, as teachers are carrying loaded guns, and the students have to walk through a metal detector before they enter the classroom. Before long, the school's new music teacher, Andrew Norris, will learn firsthand that it's even worse than it looks, as the drug-plagued institution is the territory of the charismatic Peter Stegman and his brutal gang of crazed followers. Now, under those dire circumstances, it's only a matter of time before the professor and the pupil lock horns, with unforeseen consequences. But, do drastic times call for drastic measures? In the end, is there a cure for violence?