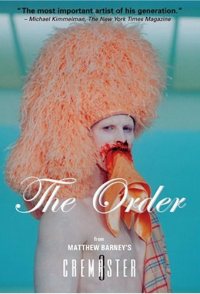 Plot of the first movie: Barney plays the Entered Apprentice and his opponents include the Order of the Rainbow for Girls (who look a lot like the Rockettes), Agnostic Front and Murphy's Law (two New York Hardcore bands), Aimee Mullins, and Richard Serra. Molten Vaseline, dental surgery, a demolition derby by vintage Chrysler Imperial New Yorker cars and a gorgeous creature who is half-cheetah/half woman all figure in this latest edition of Matthew Barney's fever dream. Much of the action takes place in two New York landmarks, the Chrysler Building and the Guggenheim Museum, as well as at the Saratoga Racetrack (upstate NY), the Giant's Causeway (Ireland) and Fingal's cave (the Scottish Isle of Staffa).