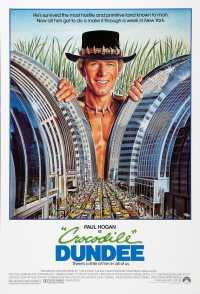 Plot of the first movie: Michael J. "Crocodile" Dundee is an Australian crocodile hunter who lives in the Australian outback and runs a safari business with his trusted friend and mentor Walter Reilly. After surviving a crocodile attack, a New York journalist named Sue arrives to interview Mick about how he survived and learns more about the crocodile hunter. After saving Sue from a crocodile, Sue invites Mick to visit New York City, since Mick has never been to a city. Mick finds the culture and life in New York City a lot different than his home and he finds himself falling in love with Sue.