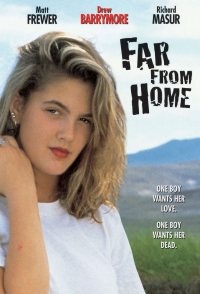 Plot of the first movie: Charlie Cox is a divorced writer who lives in Los Angeles. Charlie and his daughter Joleen are on their way home from a cross country vacation when they run out of gas in Banco, Nevada; a small town located in a remote part of the desert. It's one day before Jolene's 14th birthday. Charlie and Joleen check a nearby gas station owned by a Vietnam war veteran named Duckett, but Duckett doesn't have any gas, so they head to the local supermarket to find a phone. Sheriff Bill Childers is in the store and he advises them to go to the trailer park to ask for gas. Joleen spots the body of the store's owner, Ferrell Hogus, in a pool of blood. The Sheriff states that the murderer is most likely a drifter. The man and daughter check into the nearby Palomino Guest Ranch and Trailer Park, which is owned by a hostile woman named Agnes Reed. Whilst her father uses the phone, Joleen speaks to Agnes's rebellious teenage son, Jimmy Reed, who she briefly came into contact with earlier at the gas ...