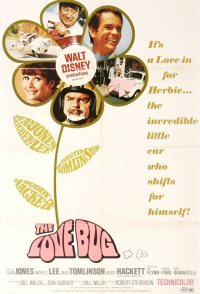 Plot of the first movie: Meet Jim Douglas, a down-on-his-luck race car driver who lives in an old run-down fire house in San Francisco with his friend Tennessee Steinmetz, a occasional drunk mechanic. One day, Jim goes to a luxury car dealer and sees a strange Volkswagen Beetle with a unusual problem: it tends to drive on its own, as if it were sentient. The little Bug follows Jim home but Jim believes that the owner of the car dealership, Peter Thorndyke, is playing a trick on him. Jim decides to try out the car, and experiences its magical nature, fahrvergnügen, if you will, for himself. Jim repairs the little car and Tennessee names the him "Herbie". Behind the wheel of Herbie, Jim becomes more successful in racing. Thorndyke wants Herbie back, but Jim refuses and Thorndyke decides to race against him. Thorndyke sabotages Herbie before a big race known as the "El Dorado" - an obvious parody of the then-new "Baja 1000" race in Mexico. Jim and Tennessee along with Thorndyke's former assistant (and ...