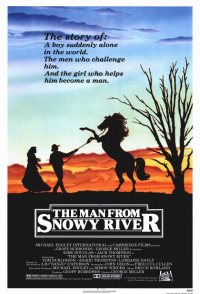 Plot of the first movie: Jim Craig has lived his first 18 years in the mountains of Australia on his father's farm. The death of his father forces him to go to the low lands to earn enough money to get the farm back on its feet. Kirk Douglas plays two roles as twin brothers who haven't spoken for years, one of whom was Jim's father's best friend and the other of whom is the father of the girl he wants to marry. A 20 year old feud re-erupts, catching Jim and Jessica in the middle of it as Jim is accused of letting a prize stallion loose.