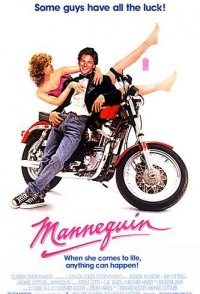 Plot of the first movie: Down-on-his-luck artist Jonathan Switcher bounces from one dead-end job to another, never managing to hold onto any of them. But everything changes when he builds a mannequin, which he falls in love with. It is the first thing he has made that makes him feel like a real artist. Much to his surprise, Jonathan discovers the mannequin prominently displayed in the window of Prince and Company department store. When he saves the life of an old lady who happens to be the owner of that store, he is rewarded by getting a job at the store as a stock boy. The mannequin later comes to life as Ema "Emmy" Hesire, an ancient Egyptian princess living in the year 2514 BC. Gorgeous and vivacious, this femme fatale helps Jonathan turn his career around, inspiring him to become the best window dresser in town. But Emmy soon discovers that the real world is not very dear, when they run into competitors who want to bring them out of business - for good.