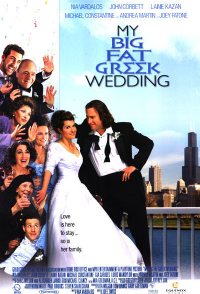 Plot of the first movie: Toula Portokalos is 30, Greek, and works in her family's restaurant, Dancing Zorba's, in Chicago. All her father Gus wants is for her to get married to a nice Greek boy. But Toula is looking for more in life. Her mother convinces Gus to let her take some computer classes at college (making him think it's his idea). With those classes under her belt, she then takes over her aunt's travel agency (again making her father think it's his idea). She meets Ian Miller, a high school English teacher, WASP, and dreamboat she had made a fool of herself over at the restaurant; they date secretly for a while before her family finds out. Her father is livid over her dating a non-Greek. He has to learn to accept Ian; Ian has to learn to accept Toula's huge family, and Toula has to learn to accept herself.