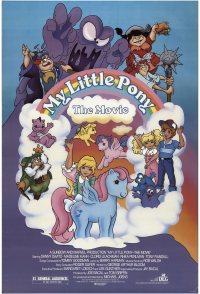 Plot of the first movie: At Dream Castle, the Little Ponies are preparing a festival to celebrate the first day of Spring. From the Volcano of Gloom, the evil witch Hydia watches the event via her cauldron and, disgusted by the frivolity, tells her daughters that they must ruin it. Hydia's daughters, Draggle and Reeka, are inexperienced at causing mischief and fail utterly at ruining the festival. They return to the Volcano of Gloom in disgrace, where Witch Hydia presents a better plan - they will the make Smooze. The sisters collect a series of disgusting ingredients, but neglect to obtain the Phlume, the prospect of which terrifies them. The spell seems to work regardless, creating a pool of sentient purple lava that gleefully buries Ponyland.