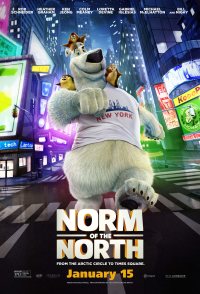 Plot of the first movie: Norm the polar bear is the son of the king of the Arctic. In his youth, he develops the ability to speak to humans, a trait shared by his grandfather. Because of this, he is made an outcast from the other animals, only being accepted by Socrates, a wise bird, and Elizabeth, a female polar bear whom Norm is in love with. Years later, Norm's grandfather has disappeared and human tourists are filling the Arctic. Socrates shows Norm and three Arctic lemmings a luxury condo that has been installed on the ice. Inside this condo is Vera, a representative for wealthy developer Mr. Greene. After Norm saves Vera from an avalanche, Mr. Greene tells her to find an actor to play a polar bear for their campaign. Socrates convinces Norm and the lemmings to stow away on a ship to New York City..