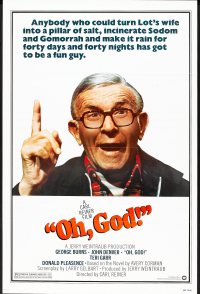 Plot of the first movie: Married to Bobbie Landers with two pre-teen children, Adam and Becky, living in Tarzana, California. Mild-mannered Jerry Landers is a hard working Assistant Manager at a Food World supermarket outlet. He's always trying to do his best at his job. But his generally uneventful life takes a turn when he receives a hand delivered note in the mail to attend an interview with God. Believing it a gag from his friend Artie Coogan, Jerry decides to go to the interview based on circumstances which compel him to do so. Based on further circumstances of the interview, Jerry, despite not being a religious person, ultimately does believe that who he meets with, initially only a voice, is indeed God, who eventually does show himself in a physical form to Jerry. God wants Jerry to be his messenger, much like a present day Moses, to pass along to the human race that "he" has provided all the necessary components of a successful existence, and it is up to the human race to do with those components as ...