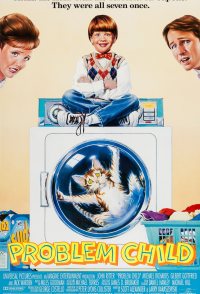 Plot of the first movie: The story of a seven-year-old mischievous orphan boy named Junior. He is hardly a model child; mean-spirited and incorrigible. One day, he is adopted by a loving man along with his obnoxious wife named Ben Healy and Flo Healy. Ever since Junior comes into their lives, he turns ordinary days into full-scale comic nightmares! He also leaves a path of serious destruction in his wake, and is even pen pals with Martin Beck (A.K.A. The Bow Tie Killer, a notorious serial killer who kidnaps his faithful correspondent, along with Flo). And now it's up to Ben as he undertakes a rescue mission to get Junior back from Beck before he plans on hurting him.