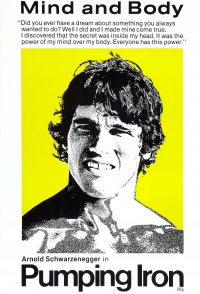 Plot of the first movie: From Gold's Gym in Venice Beach California to the showdown in Pretoria, amateur and professional bodybuilders prepare for the 1975 Mr. Olympia and Mr. Universe contests in this part-scripted, part-documentary film. Five-time champion Arnold Schwarzenegger defends his Mr. Olympia title against Serge Nubret and the shy young deaf Lou Ferrigno, whose father is his coach; the ruthless champ psyches out the young lion. Sardinian Franco Columbu competes in the lightweight class; at home in Italy he solves a tight parking problem by lifting the car into place. Joe Weider is the marketer; Mike Katz and Ken Waller go for the title of Mr. Universe. Bodybuilding and a celebrity-to-be go mainstream.