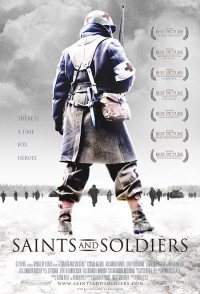 Plot of the first movie: After surviving a massacre in Malmedy, a location behind the German army in Europe, four American soldiers with only one weapon rescue the British pilot Oberon Winley (Kirby Heyborn) in a tree and they move together, trying to reach the allied forces and save a great number of allied soldiers from a German attack with the information got by Winley in his flight. While marching, each soldier discloses inner secrets to the rest of the group.