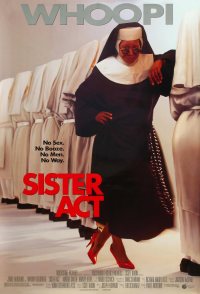 Plot of the first movie: Deloris Wilson (Whoopi Goldberg), a black woman who has chosen the stage name Deloris Van Cartier, is a Reno, Nevada lounge singer, she, the lead in a girl trio, in which she also chooses and arranges the music and choreographs the shows. She is a wisecracking, showy woman who has always loved music. She, however, only has her current job being hired by her married lover, Vince LaRocca (Harvey Keitel), to sing in his casino's lounge. She learns of Vince's true business as a gangster when she walks in on him killing one of his employees who wronged him. As a witness to the murder, Deloris goes on the run to the police, Lieutenant Eddie Souther (Bill Nunn), who has long been running an operation to get enough evidence to put Vince behind bars, this murder, which could be the metaphorical nail in Vince's coffin. However, Vince has put a contract out on Deloris' life to prevent her from testifying against him. As such, Eddie has to hide her until the trial, which will be at least two ...