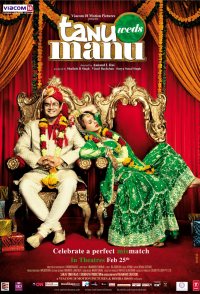 Plot of the first movie: London-based Dr. Manoj Sharma returns home to Delhi, and in the company of his parents, Kishan and Anju, as well as several others, travels to Chaman Ganj, Kanpur, Uttar Pradesh to meet his prospective bride, Tanuja Trivedi. He approves of her, informs his elders and they begin preparations for the marriage. Subsequently he gets a rude awakening when Tanuja tells him that she already has a boyfriend and plans to marry him even against her parents' wishes. Manoj informs his parents, and they set about to see other girls for their son - albeit in vain - as he has his heart set on Tanuja, and is all set to return back unmarried. Manoj and Tanuja are fated to meet again in Kapurthala, Punjab, while attending the marriage of Jaspreet Singh Jassi and Payal Sinha. While Manoj hopes to win Tanuja's heart - he will face more rejection when she enlists his assistance to elope with another male.