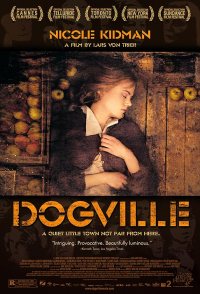 Plot of the first movie: Late one night, a beautiful and well-dressed young woman, Grace (Nicole Kidman), arrives in the mountainous old mining town of Dogville as a fugitive; following the sound of gunshots in the distance which have been heard by Tom (Paul Bettany), the self-appointed moral spokesman for the town. Persuaded by Tom, the town agree to hide Grace, and in return she freely helps the locals. However, when the Sheriff from a neighbouring town posts a Missing notice, advertising a reward for revealing her whereabouts, the townsfolk require a better deal from Grace, in return for their silence; and when the Sheriff returns some weeks later with a Wanted poster, even though the citizens know her to be innocent of the false charges against her, the town's sense of goodness takes a sinister turn and the price of Grace's freedom becomes a workload and treatment akin to that of a slave. But Grace has a deadly secret that the townsfolk will eventually encounter.