Why Did I Get Married ratings (Movie franchise) 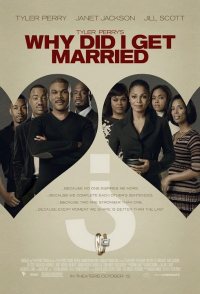 Plot of the first movie: Dr. Patricia Agnew, a psychologist, has written a best seller about marriage: hers and those of three other couples who together take a week's vacation each year to ask themselves, "Why did I get married?" It's time for one of those weeks, and all four relationships are strained: Patricia and her husband Gavin have the shadow of grief between them; Terry believes that Diane has abandoned him for her work; Angela, who's built a successful business, belittles her husband Marcus, who works for her; Mike is cruel to Sheila, his religious, overweight wife. During the week, each person's secret comes out. Will these marriages survive?