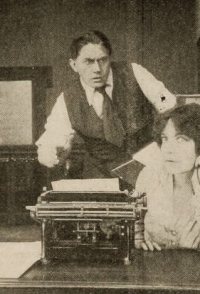 Otto Bergmann and William Bergmann are (apparently) peaceful foreign merchants conducting a business as importing chemists in a strange land. Nevertheless they are important secret agents of their government and very clever ones too. The story opens just as a great war is about to begin between their own country and that in which they are doing business. The two Bergmanns with their porter and chauffeur as their assistants are holding themselves ready to do whatever the heads of their spy system demand of them. They are, however, closely watched by their stenographer, who is really "Operative No. 0-18," an agent of the Secret Service. She is in constant communication with another Secret Service Agent, a man. The Bergmanns receive a "Message from the Sky" to the effect that a certain time on a certain day a troop train will pass over a particular railroad bridge. They are instructed to blow up this bridge just as the train crosses over it. The "stenographer" and the Secret Service man,...