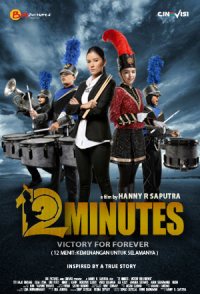 This is a story about struggle. Struggle for self-defeating. For the sake of a very simple aspiration : to realize 12 minutes that they will remember forever. A marching band in Bontang is struggling to become a champion of a major event : the Grand Prix Marching Band. Repeatedly failed to become champion, a new coach named Rene eventually lead that Marching Band. Rene - a woman coach with strong character - forced them to practice very hard during 12 months after 12 minutes in Grand Prix Marching Band. Tara, Elaine, and Lahang are members of this Marching Band. Three different children. Three different backgrounds and characters. And also three different problems. Tara has a pretty traumatic past which keeps haunting her. Meanwhile, Elaine and Lahang have to face conflicts with their own fathers. Their conflicts increased just before leaving for Jakarta. All three have strong enough reasons to stop struggling and not going to GPMB. So what will Rene, Tara, Elaine, and Lahang do? ...