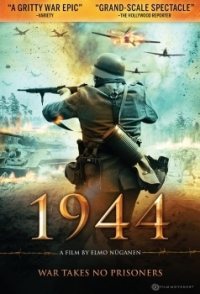 In "1944" Director Elmo Nüganen portrays the real events on the Eastern Front in Estonia in 1944, from the Battle Of Tannenburg Line, the July fighting on the Sinimäed Hills, until November, when the Sorve peninsula was already conquered by the Soviet Army. The war is shown through the eyes of participants in the events on both warring sides - the Estonians who fought on the side of the German Army in the 20th Estonian division Waffen-SS, and as part of the 8th Estonian Rifle Corps of the Soviet Army. For residents of Estonia it was a war in which everyone makes their own choices. It is with such hard choices facing the main characters of the film - the soldiers of the opposing sides Carl Tammik and Urey Jogi - as well as their comrades, relatives, friends and even strangers.