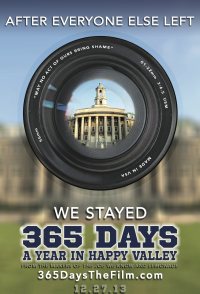 A journey into the heart of State College, one of the world's most beloved university towns, to reveal whether the crimes of Jerry Sandusky will redefine not only the way the world views it, but how those who live there or cherish it feel about how they are perceived. The film explores the quest for justice, the role of the media in shaping public perception, and the collateral damage of a rush to judgment. Emotionally engaging, 365 Days: A Year in Happy Valley will leave you contemplating complex issues about the search for truth. The film also explores the concept of forgiveness as a way for individuals to heal from unimaginable adversity.