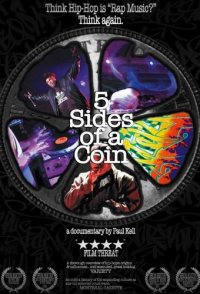 "5 Sides of a Coin" takes its viewers on a unique voyage that shows where hip-hop originated and where it has since spread in its 30+ years of existence. Unlike other hip-hop documentaries, "5 Sides" chooses to focus on each of the 5 basic elements of hip-hop in order to outline its history and its diaspora. Emcee'ing, DeeJay'ing, Breakin,' Graffiti Writing and Beatboxing are all given their own spotlight and within each section, "5 Sides" allows the pioneers, the new school, critics and experts from around the world to define each element in their own words. In an attempt to up the ante, "5 Sides" also takes on the controversies, the many misconceptions and the setbacks surrounding hip-hop today, by comparing and contrasting the various opinions of those within the culture, as well as those on the outside looking in.