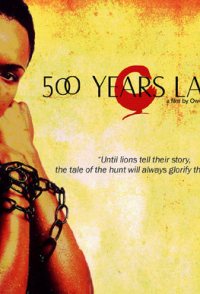 Crime, drugs, HIV/AIDS, poor education, inferiority complex, low expectation, poverty, corruption, poor health, and underdevelopment plagues people of African descent globally - Why? 500 years later from the onset of Slavery and subsequent Colonialism, Africans are still struggling for basic freedom-Why? Filmed in five continents, and over twenty countries, 500 Years Later engages the authentic retrospective voice, told from the African vantage-point of those whom history has sought to silence by examining the collective atrocities that uprooted Africans from their culture and homeland. 500 Years Later is a timeless compelling journey, infused with the spirit and music of liberation that chronicles the struggle of a people who have fought and continue to fight for the most essential human right - freedom.