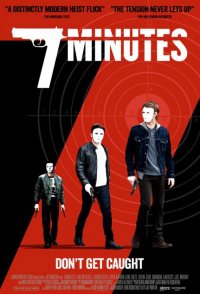 'Seven Minutes' is the story of three friends, Sam, Mike and Owen, forced by circumstance to commit a brazen robbery. What begins as a simple plan - 'in and out in seven minutes' - quickly becomes a dangerous game of life and death. As each minute of the robbery unfolds, the stakes are pushed higher and higher. In the final act, Sam's pregnant girlfriend Kate is kidnapped, escalating the situation even further and pressing our heroes to do whatever they can to make it out alive.