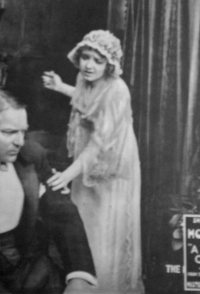 Peggy Admaston and her husband are socialites whose happy marriage quickly deteriorates as Admaston neglects his young wife for business matters, and is unaware of her loneliness and vulnerability. When Peggy is wooed by Admaston's friend Collingwood, who acts on his feelings without regard to consequences, she grows fond of him, but remains faithful to Admaston. After socialite Lady Attwill causes Admaston to doubt his wife's fidelity, his suspicions are furthered when a fire erupts one evening at the theater, and Admaston returns home unexpectedly to find that Peggy, who refused to accompany him because she said that she did not feel well, entertained a male visitor that evening. Admaston arranges to trap Peggy and Collingwood together at a country roadhouse, and begins divorce proceedings based on the resulting strong circumstantial evidence. Later, Lady Attwill convinces Admaston that Peggy's friendship with Collingwood was innocent and the couple is reunited.

Fantômas: In the Shadow of the Guillotine
Total votes: 1,929
Average rating: 7.0