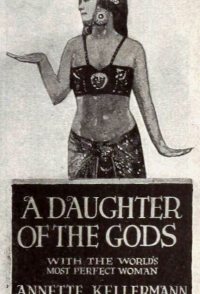 Embittered for many years by the drowning of his little son Omar, the Sultan promises to aid the Witch of Evil in her effort to destroy a mysterious beauty named Anitia if the witch will restore the young prince to life. Nearby, the Arab Sheik plots to seize the Sultan's lands by placing his beautiful but treacherous daughter Zarrah in the palace harem. Prince Omar appears by the seashore as Anitia, abducted from the Sheik by a band of thieves, is taken to the Sultan's harem. Anitia's dancing so arouses the Sultan that Zarrah jealously locks her in a tower, but she escapes by diving into the sea. Finally captured by guards, Anitia is about to be executed when Prince Omar comes to her rescue. Next, Anitia is thrown into the sea, but she reaches safety in Gnomeland, where she learns that Zarrah has killed the Sultan and instigated a revolt against Omar. Anitia leads the gnomes to Omar's defense, but he accidentally slays her. When he rejects Zarrah's advances, she stabs him to death, ...