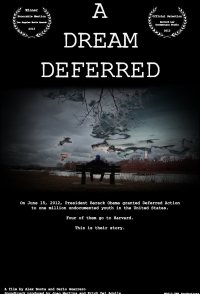 Dario, Gary, Enrique, and Leslie are Harvard students, yet they have a burden that no other Harvard student must deal with: they are undocumented. A Dream Deferred shows the journey these students have gone through, from growing up in their hometowns to getting to Harvard. Above all, though, the film shows their current journey as their future, dreams, and fate are left in the hands of a government attempting to grapple with the complexities of a broken immigration system.