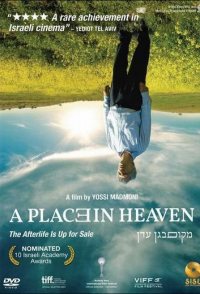 A young officer returns to his base after a daring mission. The cook's assistant, a religious Holocaust survivor, is envious of him. He believes that there is a place in heaven reserved for the brave officer who endangers his life for the sake of his Jewish brethren. The officer, in the spirit of the Zionist ethos, is secular and a non-believer. At the moment, he is so hungry that, for a plate of shaksuka, he is prepared to sign a contract transferring his secured place in heaven to the cook. Some forty years later, the present time of the movie, the tables have turned - the officer, now a retired general, is on his death bed in the hospital. His son who, to his father's horror, has found religion, is in a race against time. Before his father dies, he has to find that cook's assistant who, forty years earlier, bought his place in heaven. If and when he finds him, the son has to nullify the contract. If he doesn't, his father will go to hell.