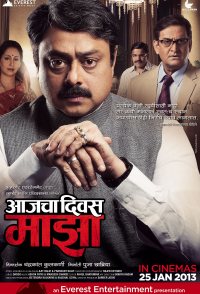 The movie is an entertaining and a cinematic journey of a morally-stricken Chief Minister who works efficiently and actively to help a beleaguered elderly singer who is yet to receive the government allotted flat applied for eight long years ago! The story line depicts originally of characters such as the CM, his wife, his PA, the Principle Secretary and many personnel from the assembly. Story revolves within the time period of afternoon 3pm to 6pm dawn during which it highlights the political decision making process and also gives us an insight to the unending mind games between politicians and bureaucrats within our system. Political movies, until now have shown people striving for the chair and power, but 'Aajcha Divas Majha' defines the hard stand taken up by a conscientious Chief Minister fighting to keep the self-esteem alive! The story inserts a ray of hope in political surroundings where emotions have little or no value.