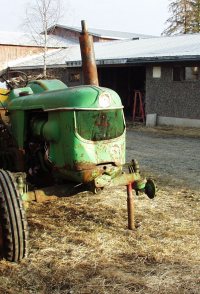 In the Autumn of 2002 the cows of the Junkkonen farm are taken to the slaughterhouse. The wheels of progress roll onwards, but two middle-aged people get left behind, Maija and Pentti Junkkonen. The small municipality of Oulunsalo is planning factories, business parks, and a new 4-lane road which would cut through the farmers' fields. The old ways of making a living are dying. The oldest daughter, director Mervi Junkkonen, realizes that she herself is part of the reason why her parents decided to give up their livelihood-there is no one to take over the farm. Through her father's 8mm films, she catches glimpses of the farm's history and a time when it was full of life. Now, Pentti (60), spends his time with his collection of tractors and some small-scale farming, but Maija (55) doesn't know what to do. Yet, life keeps taking tragic turns and old worries do not seem so important any more. About a Farm is the director's personal inquiry into a vanishing life-style and a history of which...