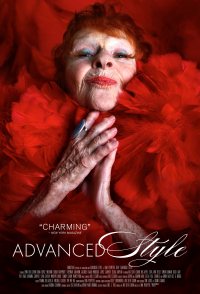 Advanced Style is a documentary that shows the lives of seven unique New Yorkers who's eclectic unique style and vital spirit have guided their approach to aging. Based on Ari Seth Cohen's famed blog of the same name, this film paints intimate and colorful portraits of independent stylish women aged 62 to 95 who are challenging conventional ideas about beauty, aging and Western culture's increasing obsession with youth, all the while being thrust into new found fame.