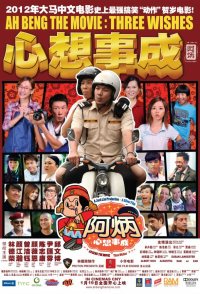 It's the eve of The Lunar New Year in a village. Every household is busy preparing to receive the auspicious God Of Fortune (GOF). Comes midnight, people of various races impersonate the GOF. They walk up to each household to offer mandarin oranges and lucky numbers in return for an "Ang Pau". Ah Beng's father being poor, dishes out only coins to these GOF. The worst dressed scruffy GOF who receives a tiny token from Ah Beng's father, is in fact, the true and almighty GOF. Without realizing, Ah Beng's father comments that he should be better dressed and wishes him good luck and good health, very sincerely. The true GOF is surprised but touched by Ah Beng's father's sincerity and grants him 3 wishes. Not-so-bright security guard Ah Beng works at an open car-park, is being bullied by a group of rich brats with luxury cars, over their parking fee. A mysterious guy comes in and helps Ah Beng. Grateful for his help, Ah Beng invites him into his life and things starts to change around him. ...