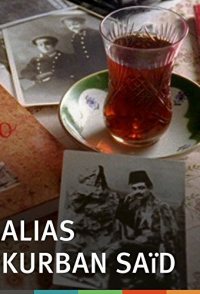 The hunt for the identity of a pseudonymous author leads extraordinary filmmaker Jos de Putter from Azerbaijan to New York to Italy in this "magnificent historical whodunit" (according to Variety), a travelogue through old films, crumbling letters and a minefield of religious and national identities. The 1937 novel "Ali and Nino" caused an immediate sensation on publication, due to its romantic Caucasus setting, Russian Revolution backdrop and steamy love affair between a Christian man and Muslim woman. Afterwards slipping into obscurity, it was recently rediscovered to much acclaim. The author, "Kurban Saïd," is a pseudonym; the mystery of who he (or she) really was is as enthralling as any novel, revealing a chain of seven or more possible Kurban Saïds, either Muslim or Jewish, German or Turkish, famous or not, and moving from the tea-pouring patios of Baku, Azerbaijan, to the scenic cliff-clinging cemeteries of Positano, Italy. As demonstrated by its feisty interviewees, ALIAS ...