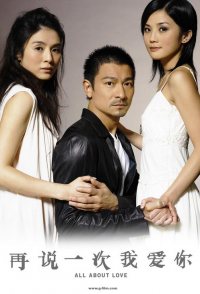 Andy Lau takes two roles in the movie and the two of him is in love with Charlie Yeung and Charlene Choi respectively. Andy Lau plays one of the role as Doctor Gao Yuen. Doctor Gao is a very dedicated professional and tends to be careless about his home life to give way to work. Six years ago, Doctor Gao's wife (Charlene Choi) died of a traffic accident and this created deep guilt in his heart. Because of this, Gao transfers to become an ambulance assistance out of the blue. Gao's life since becomes routine and dull but he remains a very disciplined professional. Gao comes to the rescue of the wounded Sam(Charlie Yeung) during one of his duty shift. The incident created a ripple on the ceaseless heart of Gao and he finds himself slowly drawn to Sam. After a while, Gao discovered that Sam's husband Derek(Andy Lau)disappeared on Sam a few years ago and is still missing to the day. Derek was once a very famous hair stylist in town, he is also a very good looking guy. Derek was also the ...

The Passion of the Christ
Total votes: 213,210
Average rating: 7.2
Switch to mobile version