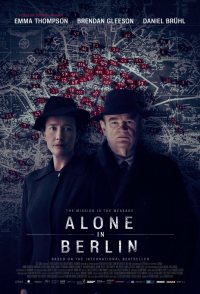 In 1940, German soldier Hans Quangel (Louis Hofmann) is killed in action during the French campaign. His parents, Otto (Brendan Gleeson) and Anna (Dame Emma Thompson), are devastated by the loss and their bereavement is unmollified by the joyful hysteria at Germany's victory. Deciding that Führer Adolf Hitler and his Nazi regime are responsible for this tragedy and much more, Otto cannot stand by any longer. As such, Otto begins to create handwritten cards denouncing the regime's abuses and lies, which he secretly deposits throughout Berlin while a disillusioned Anna insists on helping him. As the subversive cards pile up over the years, Police Detective Escherich (Daniel Brühl) is tasked to track down the leafleteer while being pressured by his increasingly impatient S.S. superior for an arrest for this "treason", regardless of actual guilt. As the stakes rise even as Nazi Germany's day of reckoning approaches, Otto and Anna are determined to spread the truth regardless of the odds, ...