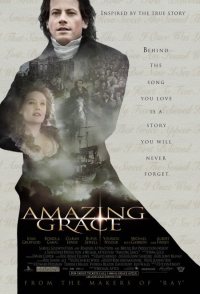 In 1797, William Wilberforce (Ioan Gruffudd), the great crusader for the British abolition of slavery, is taking a vacation for his health even while he is sicker at heart for his frustrated cause. However, meeting the charming Barbara Spooner (Romola Garai), Wilberforce finds a soulmate to share the story of his struggle. With few allies such as his mentor, John Newton (Albert Finney), a slave ship Captain turned repentant Priest who penned the hymn, "Amazing Grace", future Prime Minister William Pitt (Benedict Cumberbatch), and Olaudah Equiano (Youssou N'Dour), the erudite former slave turned author, Wilberforce fruitlessly fights public indifference and moneyed opposition determined to keep their exploitation safe. Nevertheless, Wilberforce finds the inspiration in newfound love to rejuvenate the fight with new ideas that would lead to a great victory for social justice.