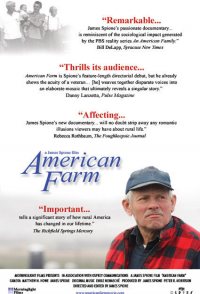 Director James Spione's passionate portrait of his extended family is an intimate revelation of the inner workings of the American family farm. Unlike previous documentaries on the subject, Spione examines the impending demise of the farm where his Mom grew up as the result not of economic trends or political pressures, but rather, the increasingly strained intergenerational dynamics between family members. With extraordinary plain-spoken candor, the Ames family reveals how callous parenting and diverging religious views may have led an entire generation to turn away from the family tradition. On the other hand, the film makes abundantly clear that the work itself is still a back-breaking grind, a difficult path for even the hardiest farmer's son to follow, even in the era of air-conditioned tractor cabs. A powerful evocation of a vanishing way of life, and a moving tribute to the rare character it takes to persevere on a small American farm.