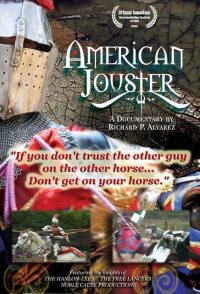 "American Jouster" examines the motivations and lifestyles of modern day knights who live a life of pain and glory on the road. The documentary covers three separate renaissance festivals during the course of a year. The video reveals how the companies structure their performances and what goes into training horses, squires and knights. The dangers of performance, the trials and tribulations of a life on the road, the difficulties of family life and the close knit bond that holds these men and women together are explored through personal interviews, backstage rehearsals and performance footage. The film explores the concept of chivalry, and it's relevancy to both the performers and society in the modern era.