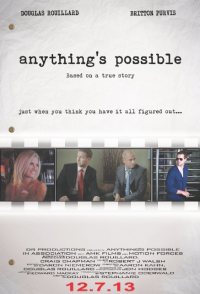 Inspired by actual events, Anything's Possible shadows the journey of a young boys dream to become an actor in the seemingly impossible industry to break into, Hollywood. Doug, played by: (Douglas Rouillard) will take his parents advice and push it to limits very few have achieved and against the odds to prove anything is possible if you try hard enough. From childhood through adulthood, he learns the hard way, but one thing is constant, never give up. His dreams of film making and finding the love of his life will keep you holding on tight. If you want something bad enough, stop at nothing to get it, just don't get mixed up with the wrong crowd along the way. This story delivers hope, passion and a will worth fighting for that is relatable to all. Life is a marathon of events; join him on the run of his life.