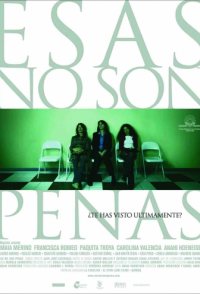 One day five women from Quito, friends in their teens, decide to get back together after fourteen years. Helena is waiting for her second child, Marina lives the ups and downs of infidelity, Diana, an early widow, shares her loneliness with her 15 year old daughter and Tamara has not abandoned the random life of nightclubs, men and drugs. The purpose of their get-together is to visit their old classmate, Alejandra, who is consumed by an illness. "Esas No Son Penas" is a portrait of the group, in which each person brings the lights and shadows of her paradoxical middle clas sstatus in a city nestled in the Andes. At that meeting, fortuitous and unusual, these women teter to-and-fro between guilt and hope, loneliness and comradarie - a tapestry of emotions exploding in the middle of the apparent routine of everyday life.