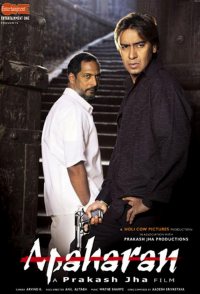 Ajay lives with his stern, honest, disciplinarian and Gandhian widowed father, Prof. (retd.) Raghuvansh Shastri. Ajay works as a salesman, but soon finds himself out of work. He applies for a position with the Police, but is turned down, even though he always makes it to the merit list. Finally he borrows 5 lakh rupees to bribe his way on the merit list, & soon his name is shown on the shortlist. Just before his selection, major differences crop up between Home Minister Dinkar Pandey and his dad, with the later threatening to expose the corruption within the State Ministry. Dinkar ensures that Ajay's name is dropped from the shortlist, and the money-lender sends his goons after him, giving him 3 days to come up with the money. A desperate Ajay decides to be part of the lucrative kidnapping scheme in Bihar, abducts a Government official and demands a ransom so that he can re-pay his loan. Unfortunately, this Government official was under the protection of underworld Don, Gaya Singh, ...