As Smart As They Are: The Author Project ratings (Movie, 2005) 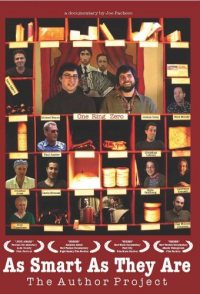 AS SMART AS THEY ARE: THE AUTHOR PROJECT follows One Ring Zero, a band whose unique sound combines unusual instruments with unorthodox techniques, and documents their collaboration with McSweeney's Publishing and an ensemble cast of award-winning writers. After moving to Brooklyn, One Ring Zero's founding members, Joshua Camp and Michael Hearst, discovered a curious unmarked store that doubled as a makeshift office for McSweeney's, an offbeat publishing company founded by author Dave Eggers. In addition to selling an odd assortment of products ranging from small rubber cubes to lumberjack supplies, the peculiar storefront also served as the venue for weekly literary readings that brought a variety of both burgeoning and established writers to the tiny space. With Camp on accordion and Hearst on claviola, they soon began performing regularly at the events and ultimately invited a handful of authors to contribute lyrics. After receiving contributions from a variety of celebrated writers...