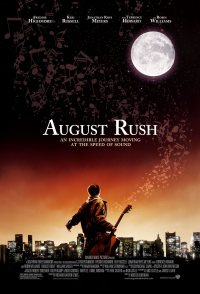 Lyla Novacek (Keri Russell) is a cellist studying at the Juilliard School and living under strict rule of her father (William Sadler). Louis Connelly (Jonathan Rhys Meyers) is the lead singer of "The Connelly Brothers", an Irish rock band. Lyla and Louis meet at a party after their respective concerts, and have a sexual encounter on the rooftop. The day after, they separate in a hurry, and are unable to maintain contact as Lyla is ushered away by her father to Chicago. Lyla is also aware that she is pregnant. Later, when in New York City, after an argument with her father over her unborn child, she is struck by a car. Due to the accident trauma, she gives birth prematurely, and her father secretly puts the baby boy up for adoption under her name, allowing Lyla to believe that her son died. Eleven years later, Evan Taylor (Freddie Highmore) is living in a boys' orphanage outside New York City, where he meets Richard Jeffries (Terrence Howard), a social worker with Child and Family ...