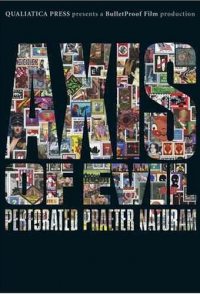 AXIS OF EVIL is an experimental-feature-documentary-essay that features interviews with sixteen artists, scholars, and activists, including Howard Zinn, Daniel Ellsberg, Bernardine Dohrn, Martha Nussbaum, and others, talking about the concept of evil, its usefulness as a framework for US foreign policy, and evils that they've encountered in their lives. The interviews are illustrated with postage stamp art, archival footage, and other elements that interact with, illustrate, and comment on the statements of the interviewees. It's a unique and well-suited approach to the idea of evil. The film is different from the slew of Bush-bashing documentaries that are flooding media outlets. Because it's about the idea of evil, it goes way beyond Bush; major topics covered include racism, war, Vietnam, criminal justice, capital punishment, and of course the Axis of Evil. It's a reasoned discussion of evil, not a polemic, and the cutting-edge stamp art makes it unlike anything else out there.