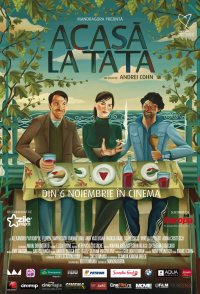 Robert, a published poet and journalist from Bucharest, goes back home, to the village where he was born, which he hasn't visited since his mother's death. His relationship with his father is not a very good one, and the reconnection is not helped by the fact that the old man now lives with Iuliana. Over the next 24 hours, Robert will confront his past, in an outstanding effort to renegotiate his present. It is a war of readjustments: expectations, status and ambitions will be discussed in search of a certain existential clarity.