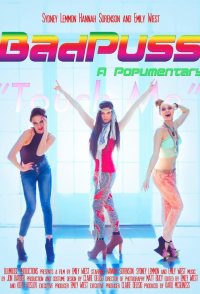 Vaginal exploitation, severed tongues, fathomless orgasms, brazen pop music and the ever present threat of narcotic overdose is brought intimately and hilariously to the screen in the new film by writer/director Emily Wiest. BadPuss: A Popumentary merges elements of drama and documentary with black humor and a bold new pop score composed by The Disco Biscuits' Jon Barber. For the first time in years BadPuss, the fearsome pop trio, are banding together for their epic comeback tour, Daft Moon. Driven apart by scandal and artistic clashes, Lara Reares, Kassie Castles and the mysteriously mute Ro are back to bury the hatchet that cut their careers to pieces with jealousy, arrogance and the release of one of the most downloaded celebrity sex tapes of all time. Lives will be altered, faces bruised, stumps ruptured and love consummated as the three ladies of BadPuss learn what it may finally take to the make the music.