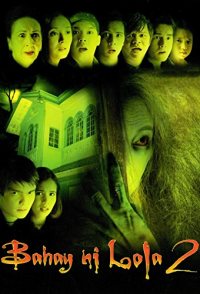 Their dream home became a house of horror. Rupert & Nina are a young, recently-married couple who couldn't be happier. He's zooming up the corporate ladder at the ad agency where he works, while she's a glowing lady who's just given birth to a beautiful baby girl. Just when they thought that things couldn't get any better, they are able to purchase a large, recently-renovated house for a price that's too good to be true. But true it is, and Rupert and Nina quickly move in together with some other relatives, including Aunt Belle, Nina's sister Carla, and brother Andrew. They're also joined by their loyal houseboy, Glory. To turn the house into a home, Nina hires flamboyant interior decorator Richie to add more elegant touches to the decades-old house, which could supposedly benefit from good feng shui. But good things seldom last. After they settle into the house, some family members glimpse the restless spirit of a pale old woman in certain rooms late at night. A swarm of flies even ...