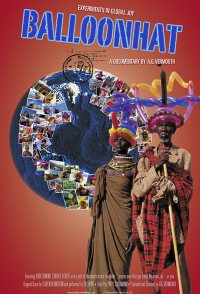 Balloon twister Addi Somekh sees colors and shapes coming out of your head, and brings his visions to life in the form of elaborate sculptural balloon hats. He meets a photographer, Charlie Eckert, who shares his weariness at the barrage of violent images driving the global media. When Charlie offhandedly suggests bringing the balloon hats to random people around the world, Addi agrees, and the two of them set out on a journey to create a photo art book drawn from their adventures. Laden with backpacks full of balloons and cameras, Addi, a Silicon Valley slacker and Charlie, a Queens, New Yorker, forgo life in America during the dot.com boom to prove their thesis: people everywhere need joy to survive, whether it be the Balkan States in the aftermath of war, the strife-ridden Middle East, or the forgotten jungles of the developing world. As BALLOONHAT travels through different countries, it reveals not only the travails of a grassroots art project, but also America's changing status ...